Part of this video was during low tide when we could walk out to the little Island about 1/4 mile from the beach. It was awesome.

Tofino is a small town set at the end of the world. It is on the west coast of Vancouver Island and anyone travelling there must cross mountain passes as well as taking a ferry from the mainland to Vancouver Island.

George had a load to unload in Tofino. On Friday he came home. Tashya, Murphy and I decided to go with him to see this tiny town we’d heard so much about. As we drove first to Vancouver to catch the ferry to Nanimo the scenery through Manning Park was as usual breathtaking. Murphy, only four, was an excellent traveller. He was so enthralled with what was going on around him and with being with his best friend – ‘poppa’. He was going on a trip. When we got to the ferries – he was almost hyper in his excitement. We boarded the boat – and were on our way. The hundreds of islands scattered around were beautiful. It was sunny and the ocean breeze was cool but refreshing. 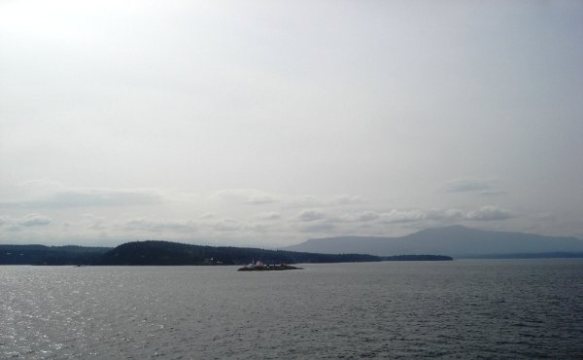 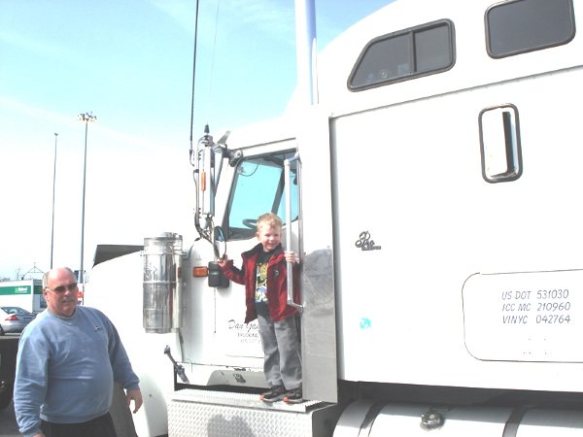 Then we were on Vancouver Island. I have a niece there but it was getting late so there was no time to stop. We drove through Port Albernie. My mother and father lived there and my dad worked at the mill there, riding logs. My two oldest brothers (Reg and Dusty) were born there. I was disappointed to see there wasn’t a sign anywhere to tell me where Bill & Emma Miller lived. Again the unique scenery was astounding. Huge, huge Douglas Fir were by the road. Moss grew on everything – even old dead trees making them look like scary monsters.

Then we went on over mountain passes and pouring rock bed streams. We arrived in Tofino at dinnertime. It was cool weather. We went for supper then back to our room ‘or our blue house’ as Murphy called it. It rained off and on all night. Everything was damp.

In the morning we got up and after breakfast explored the town which is tiny and filled with cafe’s, restaurants and gift shops. In Tofino there are no fast food chains or store chains. Everything is one of a kind. 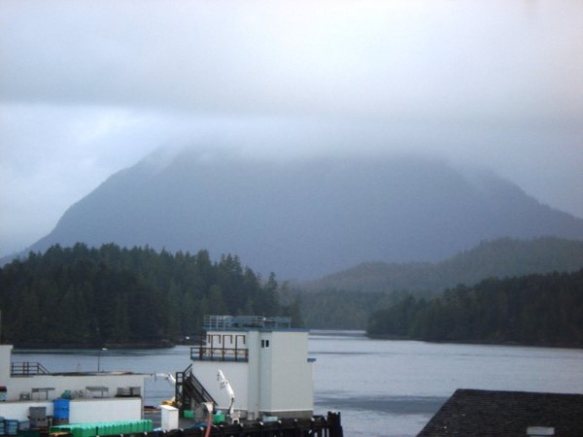 This was the scene outside our rooms. 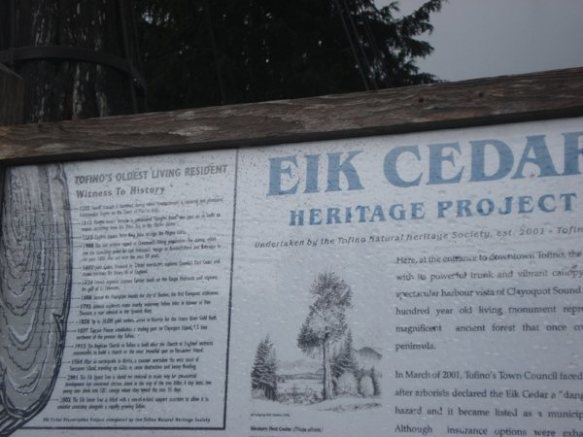 This is the oldest resident in Tofino they are trying to preserve.

Then we went to the ocean. Oh, oh, oh. Words cannot describe the sights. The waves were classified ‘moderate’ and I plan to go gain to see the ‘extreme’ waves. The beach is cluttered with sea-shells and driftwood – so much they crunch and break under your feet. 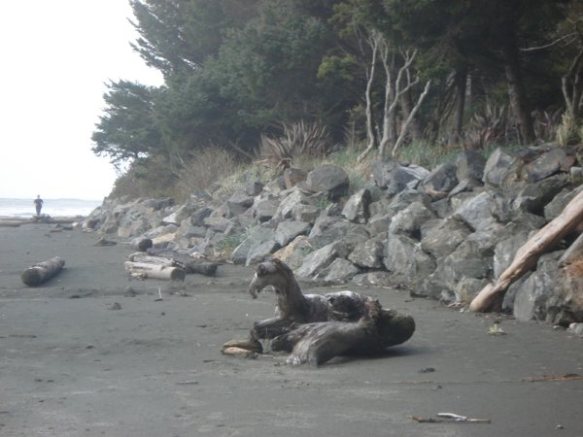 Another Monster for Murphy. He asked if Poppa was strong enough to carry it home. 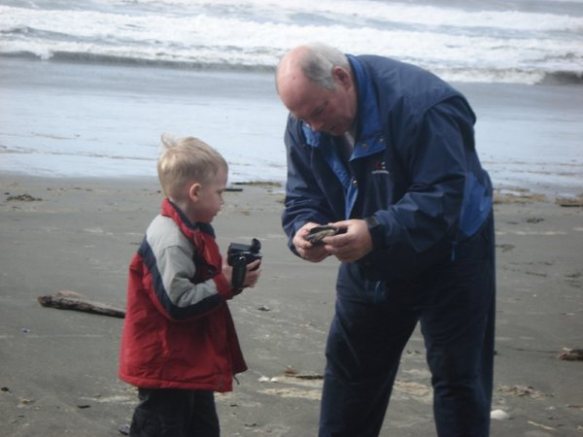 Then there was the waves. So fascinating you could spend hours watching them. A few surfers were actually in the waters. I talked to one and he explained that with a wet-suit you could go into water about 35 degrees (near freezing) or about 7 degrees in Canadian language. A person could stay in about 5 hours without freezing.

The tide was coming in fairly slow. George took Murphy out to the waves and as they started edging closer George told him to run – Confused – Murphy ran right into the waves and got soaked. It was funny – although I’m sure Tashya wasn’t laughing. George got him out immediately. 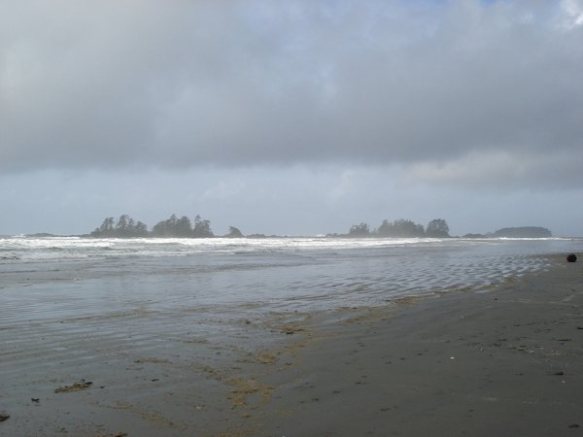 The island about 1/4 mile out. You can walk to it at Low Tide 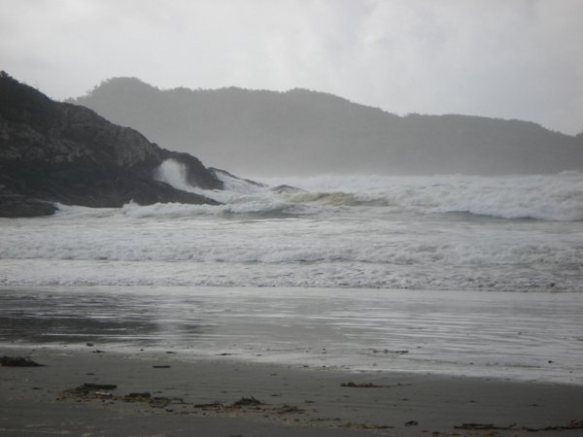 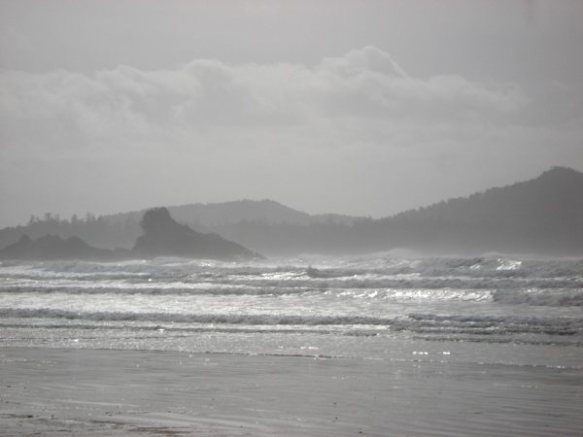 We found out the tide comes in, then goes out about every 12 hours. High tide was at 6. If we wanted to walk out to the Island we would have to wait until about 4:00 in the afternoon.

We went back and explored around town more – checking on things like Whale watching tours. They cost $100.00/per person and they couldn’t guarantee we would even see a whale. It was too expensive for my taste.

Then at 4:00 went back to walk out to the island. When we got away from the beach and rocks and houses the wind was blowing like crazy with nothing to block us. The rain and cold cut right through your clothes – but – oh – I know how the people following Moses might have felt. The Island blocked the water – and we had clean sand to walk on – but on either side the waves continued to crash and roll to the beach. It was surreal. Murphy, little trooper that he is walked with us – no complaining, no crying. We tried to block him as much as we could.

When we got to the island which is very narrow – and privately owned. We walked to the other side – huge gorges, and waves coming right over the island. I was upset. My camera wasn’t in my pocket. Fortunately I hadn’t lost it – just left it back at the hotel room. But George had his video camera. I can’t wait until I can download the sights. The camera is in George’s truck right now.

George unloaded Monday morning and we went back. His dispatcher called and we had to go to Victoria to pick up a load. It had rained, sometimes very heavy all the way back. Then waiting for the ferry, I saw this beautiful little rainbow. 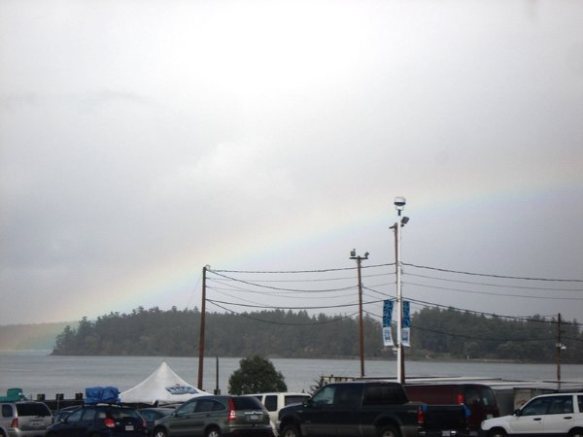 They told George he had to cross the border at Vancouver. It was a rush trip – so he couldn’t drive us home. We debated going with him but Tashya didn’t have a passport. So we called a neighbor to pick us up. I am so grateful to Wayne for doing this. We didn’t get home until 11:00. It was a long day but I’m sure George’s was much longer. Murphy was again an angel – and slept all the way home. He is a delight to take on a trip. And what a wonderful trip it was. I can’t wait to go back – this time in the winter – when the waves are extreme and I want to stay in a hotel on the beach where we can watch the waves from our room too.