Once upon a time there were two children, a brother and a sister.  Sunrise was a beautiful little girl usually all pastels and muted in the mornings, but occasionally she would pack a wallop just because she could. 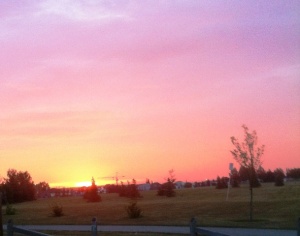 Sunset, the boy was usually vibrant reds and somber grays, but sometimes he was the soft gold that lights the skies, just because he could.

The two children had so much fun hiding behind fluffy Cloud and peeking out to create colors as striking as anything their cousin, the elusive Rainbow did.

But they often thought Cloud was mean and cruel.  Cloud would cover the whole sky and no one could see how wonderful Sunrise and Sunset could create awesome pictures of delight. Sometimes Cloud created cold and wind, with icy pebbles that covered the ground in white for days on end.  Cloud was not only mean, but he was sometimes ugly as well, they decided, looking at the dead trees and covered plants.

By using the Cloud when he towered up, Lightening gained enough speed he could sometimes break right through a heavy covered Cloud and show his jagged light flashing.  Thunder was heard, whether Cloud was big or Cloud was small.  But neither could make their incredible sights or sounds last for more than a moment.

Sunrise and Sunset first felt proud, realizing they could draw their pictures for much lengthier times than their cousins who were so much older.  But their pride was short-lived.  Cloud was deliberately covering whatever they had to offer the creatures below them.  It was as though he knew the children were complaining about him.

Finally they approached their busy father.  He was silent a long time and then nodded his head.

“Are you sure this is what you want?”

They readily agreed it was exactly what they wanted.  If anyone could get rid of Cloud it was their powerful father.

For many days only Sun was in the clear skies.  The creatures on earth seemed happy as they danced and played in bright Sunshine every day.  But Sunrise and Sunset could not draw even one tiny picture of beauty.  Without Cloud, there was no reflection in the sky.  There was only clear sky which did not show their pictures at all.

Then tragedy struck everywhere.  Trees, plants and even creatures started dying.  Slowly the whole earth looked wilted and sad.  Sunrise and Sunset cried and cried.  Finally, their father took time from his busy duties and approached them.  He looked exhausted.   Moon, his lovely wife, came out to relieve him. 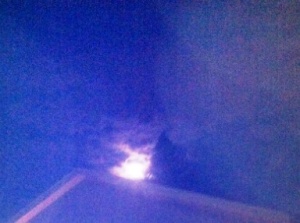 “Are you sure this is what you want?”  He asked again.

This time both children shook their heads.  No, this was not what they wanted at all.  They knew they needed Cloud.  So did the world.  Cloud gave water to the plants, trees and even the creatures. Cloud was not mean and cruel, like they thought.  Everyone needed Cloud, but especially they did.  Without Cloud they couldn’t draw their pretty pictures.

Next time you think you know something – first check it out to make sure you’re right.

8 thoughts on “Sunrise and Sunset”